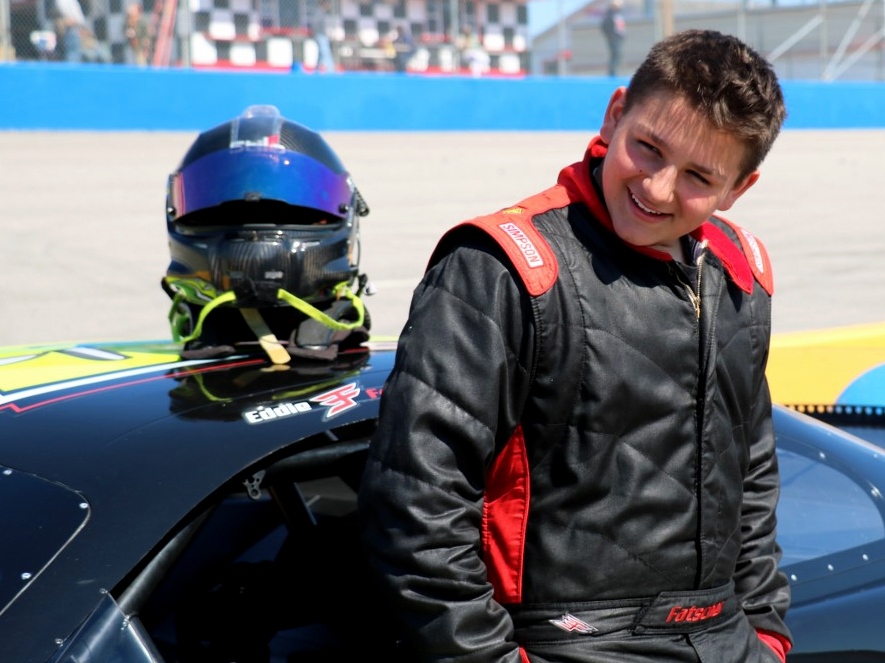 Column By: MATTHEW WIERNASZ / RPW – LONG ISLAND, NY – Eddie Fatscher has entered first year in Super Late Models. The 14-year old driver went to Thompson Speedway Motorsports Park for the Icebreaker. He thought he had a good experience as he finished second in the event.

He wanted to thank Fathead Racing for what they did for him that weekend at the 5/7 mile oval because he felt the car was an absolute rocketship and felt good the whole weekend when he came out with a top three finish.

A big help to Fatscher’s success that weekend was four-time NASCAR K&N Pro Series East Champion Andy Santerre. Santerre spotted for Fatscher that weekend at Thompson and Santerre gave Fatscher a rundown of what he needed to do at the track, what he needed to do to make the car to know to make the car comfortable and it made Fatscher confident going into the race. Santerre’s advice to Fatscher was to make sure to keep the tires on it and made sure when he got to them to know when to pass another driver clean. Santerre kept telling Fatscher that Eddie MacDonald was a very respectful driver. Fatscher felt it was fun to race with Eddie MacDonald.

Fatscher tested at Bristol Motor Speedway the last couple times to prepare himself for the first annual U.S. Shorttrack Nationals that will be held next weekend. The first time Fatscher tested there. He felt it was an awesome experience with the 38 degree banking as the car was good out of the trailer and managed to be the second fastest car throughout the day.

He tested yesterday as NASCAR Xfinity Series driver Darrell Wallace, Jr was able to give Fatscher advice on how to great around the world’s fastest half mile. He felt the first few rounds he would take it easy.

After he runs the Bristol race, he will pick and choose some PASS races as he has nothing set in stone for the rest of the season. It will depend on how he does as he keeps moving on.

Eddie Fatscher Racing is a family team. With Mother’s day on Sunday, Fatscher is thankful to have his mom Kristie by his side.

” She’s always been by my side the whole way. She’s almost like my travel buddy. She’s usually the one that comes with me to all the races in these different states to these tracks and drives us everywhere. She really makes the racing happening. The press releases get out make sure that I am on social media.” Fatscher Said