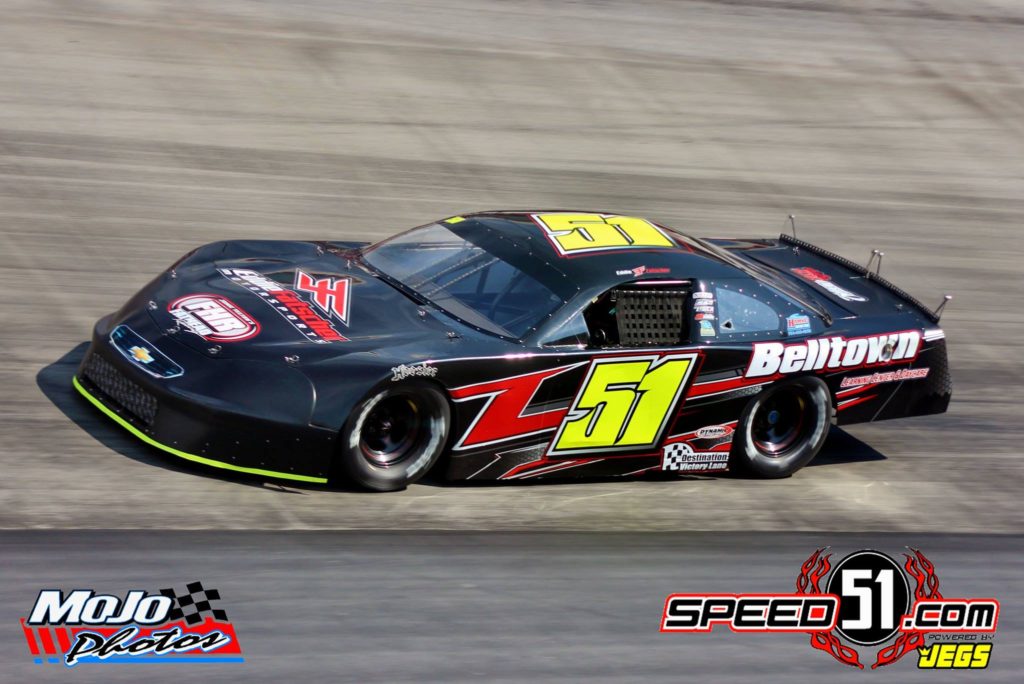 Long Island, New York (May 18, 2017) – This weekend race fans and competitors alike will come together to celebrate the beginning of a new chapter in motorsports history with the highly anticipated inaugural running of the Short Track U.S. Nationals (May 19-21) at one of the country’s most famed tracks – Bristol Motor Speedway.

This special event will showcase a variety of sanctioning bodies and draw some of the best short track drivers in the country – all competing for short track glory in six different categories of racing – Super Late Models, Pro Late Models, Late Model Stocks, Modifieds, and Street Stocks and Compacts.

For one driver however, just the idea of making the show and competing on Bristol’s famed high-banks will be gratifying enough. That driver, 15-year old Eddie Fatscher out of Long Island, New York, who will attempt to make the field driving for Jamie Yelton’s Fat Head Racing driver development team in the Pro Late Model division.

“Earlier in the year just the thought of racing at Bristol in this event got me excited,” said Fatscher. “Now it’s starting to turn into reality. There’s still a lot of work and no guarantees but we’ve had a couple of good tests at Bristol and my speed was good. Fat Head Racing has prepared me a great car for this weekend’s race. My expectations are realistic – nothing would be more exciting than going door-to-door with some of the best.”

This weekend, Fatscher hopes to make his dreams reality when he rolls out strapped into his No.51 Belltown Learning Center and Daycare Ford Fusion. And just like the Beatles did during the 1960’s, Fatscher is going to Bristol “With a Little Help from My (His Own) Friends.”

Joining Fat Head Racing in the Super Late Model Division and serving as Fatscher’s weekend teammate is none other than Bubba Wallace Jr. Bubba, as he’s widely-known in the garage area, competes full-time in the NASCAR XFINITY Series driving the No.6 Ford Mustang for Roush Fenway Racing.

Fatscher and Wallace spent time together last weekend as the two drivers tested at Bristol in preparations for the Short Track U.S. Nationals.

“Bubba being here giving me advice and support is just amazing!” “He’s a really talented driver and even a better guy in person. He’s got a great sense of humor and made me feel really comfortable. I can’t thank him enough – he’s so cool and down to earth,” added Fatscher.

Also joining Fat Head and Fatscher is NASCAR race-winning spotter, Freddie Craft, who’ll serve as Fatscher’s ‘Eye in the Sky’ on raceday. Craft spots full-time in the NASCAR Monster Cup Series for Landon Cassill as well as for Wallace in the NASCAR XFINITY Series.

Fatscher, a newcomer on the national short track scene is in the midst of his first season driving stock cars for Fat Head Racing. With only a handful of career stock car starts (late model and super late model) to his credit, Fatscher is a former national Bandelero and Legends Car Championship driver who’s displayed tremendous potential and determination to succeed at this next stage in his career.

Competing for Fat Head Racing, the newly turned 15-year old started the season racing his late model at New Smyrna Speedway along with starts selected starts in the CARS Tour and the Pro All Stars Super Series. In March, the up-and-coming Fatscher impressed onlookers with a career best second-place finish in the highly competitive PASS Icebreaker event at Thompson Speedway Motorsports Park.

The Short Track U.S Nationals will be aired by Speed51.com on a live pay-per-view video stream where fans can watch all the action. The highly-anticipated event kicks off Friday, May 19 with practice, before qualifying on Saturday, and the main events on Sunday May 21.